AccuGlide started in 1996 and has developed from one tile contractor’s creation to over 2,500 saws sold worldwide. As a family owned and operated company, we welcome our customers into the AccuGlide family. You’re not just buying our tools, you’re partnering with a team invested in your success. 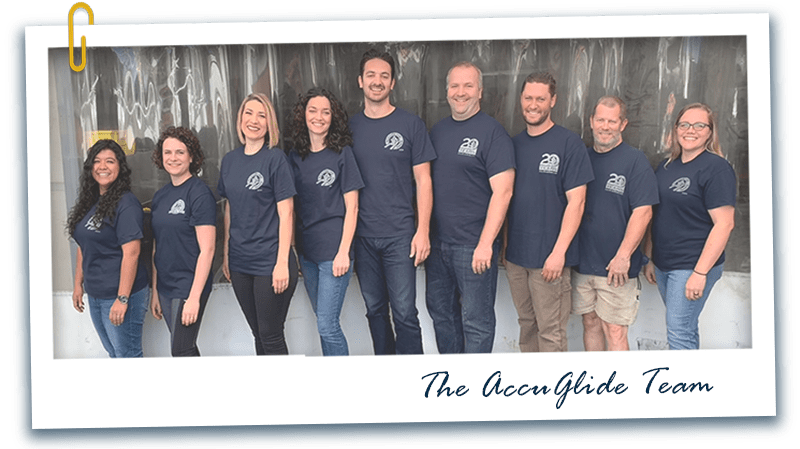 Built Local, Shipped WorldwideAccuGlide products are machined and assembled here in the US. Our equipment can be found all over the world.

We take pride in our humble beginnings. Our founder, ‘Big’ Mike Harris, invented the first portable rail saw in the 1980’s when he decided to grow from tile contractor to stone fabricator. Investing in huge, expensive stone equipment was going to be a challenge. By creating the powerful, portable AccuGlide stone saw, he was able to hit the ground running with his business expansion. After a few years using the AccuGlide saw in his business, Mike and his wife Grace began to manufacture the saws for other stone fabricators. It was an instant success. AccuGlide Saws was born in 1996 when the original AccuGlide Saw was introduced to the market. Over the years, AccuGlide added new products and more family members to the company. When Mike and Grace passed away, they left behind a legacy of innovative tools and incomparable service that helped thousands of stone shops grow and succeed all over the world. Grace and Mike’s children, Ben and Beth, now manage AccuGlide Saws, expanding on the quality products and service AccuGlide has always been known for. They maintain the vision of unstoppable innovation, strict quality control, and top-notch old-fashioned customer service.
We use cookies on our website to give you the most relevant experience by remembering your preferences and repeat visits. By clicking “Accept”, you consent to the use of ALL the cookies. We do not sell your personal information.
Cookie settingsACCEPT
Manage consent

This website uses cookies to improve your experience while you navigate through the website. Out of these, the cookies that are categorized as necessary are stored on your browser as they are essential for the working of basic functionalities of the website. We also use third-party cookies that help us analyze and understand how you use this website. These cookies will be stored in your browser only with your consent. You also have the option to opt-out of these cookies. But opting out of some of these cookies may affect your browsing experience.
Necessary Always Enabled
Necessary cookies are absolutely essential for the website to function properly. These cookies ensure basic functionalities and security features of the website, anonymously.
Functional
Functional cookies help to perform certain functionalities like sharing the content of the website on social media platforms, collect feedbacks, and other third-party features.
Performance
Performance cookies are used to understand and analyze the key performance indexes of the website which helps in delivering a better user experience for the visitors.
Analytics
Analytical cookies are used to understand how visitors interact with the website. These cookies help provide information on metrics the number of visitors, bounce rate, traffic source, etc.
Advertisement
Advertisement cookies are used to provide visitors with relevant ads and marketing campaigns. These cookies track visitors across websites and collect information to provide customized ads.
Others
Other uncategorized cookies are those that are being analyzed and have not been classified into a category as yet.
SAVE & ACCEPT
Loading Comments...